Peppers or chili peppers or Capsicum

Pepper is a type of fruit that is used in cooking for its spicy taste. It includes the nightshade family of the genus Capsicum belongs to the species Solanaceae. These include the hottest pepper varieties which are also known as chili pepper and sweet pepper varieties such as bell peppers (there are different colors including red, yellow, orange, green, white and purple). Pepper is native to the Americas. But now it is cultivated all over the world which is used as cooking and medicine. 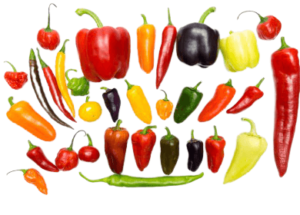 Green pepper is a popular vegetable for your kitchen. These can be added to almost any delicious meal. Moreover, green pepper compounds can provide a wide range of health benefits. Green pepper is a very good source of vitamin C. It also contains vitamin B-6, vitamin A, iron, copper, potassium, lutein, small amounts of protein and carbohydrates.  Absolutely no cholesterol.

Green pepper contains a chemical compound called Lutein. Lutein is an antioxidant that improves eye health. In particular, lutein helps to strengthen the part of the eye that is often damaged by blue light. And can help prevent cataracts.

Anemia is the lack of enough iron in your blood.  Green pepper can limit the production of your healthy red blood cells which carry oxygen throughout your body. The main symptoms of anemia include fatigue and weakness. Green pepper is not only high in iron, they are also rich in vitamin C, which can help your body absorb iron more efficiently. This combination makes green pepper a superfood in the prevention and treatment of iron deficiency anemia.

Eating green pepper not only increases the level of vitamin C in the body but also increases the production of saliva which improves digestion to such an extent that it eliminates problems like gas, heartburn and indigestion. It is very beneficial for digestion as they are full of dietary fiber. In addition, green pepper eliminates the problem of sudden cold and sinus problems.

Pepper is rich in vitamin C and beta-carotene, which boosts the immune system as soon as it enters the body. Eating green pepper increases the secretion of a hormone called endorphins in the body which in turn reduces the incidence of stress, and also improves mood.

Raw pepper contains a lot of antioxidants which help to get rid of all the harmful toxic substances that have accumulated in the body. As a result, there is almost no risk of cancer cells being born normally.

Regularly you take green pepper increases the power of insulin. As a result, blood sugar levels do not get out of control and the risk of developing diseases like diabetes is reduced.

Multiple ingredients in green pepper reduce the level of bad cholesterol present in the blood. As a result, the risk of any kind of heart damage is reduced.

Stuffed Bell pepper is a common food included in many dishes. It consists of half a pepper that is filled with a variety of fillings, often including meat, vegetables, cheese, rice or sauce. The dish is usually assembled by filling the pepper cavity and then cooking.

Preheat the oven to 350 degrees Fahrenheit.

Cut a thin piece from the stem edge of each bell pepper to remove the top of the pepper. Remove seeds and membranes; Wash the pepper.

Cook the meat and onions in a 10-inch pot for 8 to 10 minutes, stirring occasionally until the meat is brown. Stir in the extracted rice, salt, garlic and 1 cup of tomato sauce; cook until hot.

Fill the pepper with the meat mixture. Stand the peppers straight in an 8-inch square glass baking dish. Pour the remaining tomato sauce over the pepper.

Uncover and bake for about 15 more minutes or until peppers are soft. Sprinkle with cheese.