What is Sweet Italian pepper? 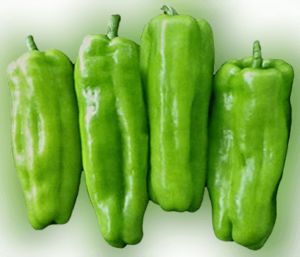 Sweet Italian Peppers of the species Capsicum annuum . It is also known as Friggitello, Golden Greek Pepper, Tuscan Pepper, and Pepperoncini Pepper. In the United States, they are called “Peperoncini” and In Italy, are called “Peperone”. It is also known as Friggitello in Italy.  Italian Peppers originated in Italy and Greece, although the popularity of this pepper has spread around the world. This pepper is very popular in the United States.

Usually, Italian Peppers are sweet and light in taste, not too hot. The most delicious taste and flavor are when you eat fresh pepper. It can be served with ingredients in a variety of foods Soup, sauce, salsa, salad, pizza and sandwiches. It is even served with pickles and kebabs.

Like other peppers, this pepper requires a warm climate with plenty of sunlight but it does not tolerate frost. This pepper is thin-skinned, 2 to 3 inches in length. The skin color is light yellow-green but mature or ripe peppers are bright red or orange.

Sweet Italian Peppers Seeds should be sown 8 to 10 weeks before the end of winter for a good harvest. Sow with soil dust on top of the seeds. Seeds can be expected to germinate in 15 to 25 days.
To plant sweet peppers in the field, wait at least a week. Field soil pH value 5.5 – 6.8 is best. Mix the soil with organic matter and cultivate to a depth of at least 8 inches (20.5 cm).
These pepper plants need at least 8 hours of sun per day. Necessary steps should also be taken to prevent the damage of insects and pests. When the trees begin to bloom, remove the cover so that pollinators can enter and work on them.

Lombardo pepper is a sweet pickled pepper in a delicious and medium size. It is also known as Lombardy. The first cultivation in the Lombardy area of northern Italy hence the name Pepperoni Lombardo. Lombardo pepper is an old variety of Italian. Pepperoni is the Italian word for hot pepper. It is not clear when and by whom Peperosini came to Italy.

Lombardo pepper plants are about 80 cm tall. Usually, there are two or three specially stretched stalks. Lombardo peppers remain green, when fully ripe they turn from pale green to yellow to orange and bright red.

Spanish pepper is considered better and healthier than black pepper. Lombardo has its own paprika flavor. They are nice fresh, pickled, with cheese, grilled, used as a salad and as a snack. Each must have spicy pizza or pasta sauce. These Italian sweet peppers taste great for adding fresh salsa.

These are often ritualistic, Fresh peppers are used in Italian salads, pizzas, sauces, soups, salsas and sandwiches. Pepperoncini pepper can be eaten raw, although the pickled variety is by far the most popular and used. A great pickled pepper with amazing taste. Pepperoncini’s pepper length is 2 to 3 inches. The skin is light yellow-green but will turn red as it matures.

The peppers are thin and slender in the shape of a long cone that is reminiscent of a cigarette. Also known as bergamot cigarettes. Tall, vigorous and well-branched plant. Peppers can be up to 12 cm in length and 2 cm in width.

Their taste is always sweet, it can be eaten as a salad or fried, in many dishes including pizza and fresh. Great for bergamot pepper pickles.

Sow in a warm place from the beginning to the end of March. You can get the harvest from early August to October.

This pepper is a sweet-tasting pepper that is found in southern Italy. Tall, shrubby trees produce lots of green fruit that turns bright red.

These peppers are the most pickled, delicious in pasta dishes, salads, pizzas and sandwiches. It is yellow-green to yellow and finally red. But the green stage has the best smell.

This pepper grows well in cold climates. In early spring, plant the seeds in warm temperatures at night. Seeds will germinate in 7 – 21 days. Grow the seedlings until they are leafy. Plant them directly in rich soil and in full sun. Collect if the peppers are green and full size.